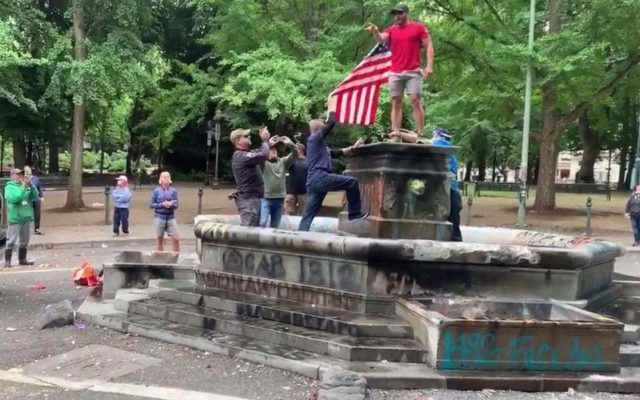 PORTLAND, Ore. — A drive through downtown Portland will show you exactly how ugly protests have gotten over the last five weeks.  Buildings have been defaced, covered in spray paint, windows shattered and countless objects thrown at police.

Eric Post is a husband and father fed up with the destruction.  The last straw for him was watching the area around the 100 plus year-old elk on Southwest Main between 3rd and 4th Avenues and the park blocks go up in flames.  The elk had to be removed.  On the 4th of July, he decided to rally some friends.  They went down to where the Elk stood and placed an American Flag there.  Within 15 minutes, someone lit it on fire.  The ashes fell into the basin below.  Eric heard about it quickly and returned on July 5th with a large group of his Facebook followers.  He has more then 70,000 likes on his page.  He retrieved the ashes and spoke to the crowd that was gathered around.

“When placing an American Flag in an American city on Independence Day is dangerous or controversial, it’s time to recognize how broken things are,” Post said.

Eric longs for the days when he could go downtown with his children to visit a park or just enjoy the hustle and bustle.  He loved sharing those things with them.  He’s had many discussions with his teenage daughter about how to end racism and police brutality.  He tells FM News 101 KXL that is possible by gathering shoulder to shoulder rather than being combative like the anarchists who are destroying Portland.

He added: “America isn’t a place where lawlessness and chaos rules.  It’s a place of where beautiful things happen when chaos is quieted.”