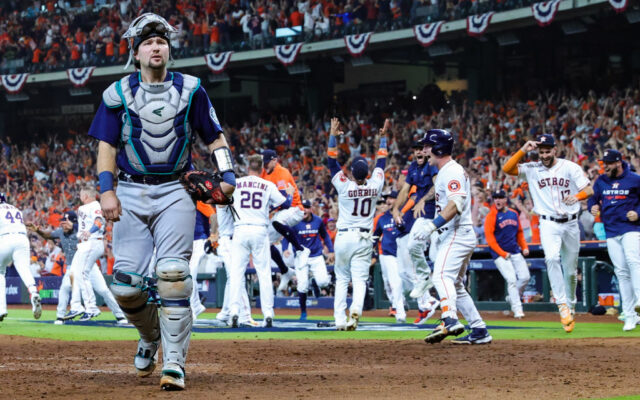 HOUSTON, TEXAS - OCTOBER 11: Cal Raleigh #29 of the Seattle Mariners reacts after a walk-off home run was hit by Yordan Alvarez #44 (not pictured) of the Houston Astros during the ninth inning in game one of the American League Division Series at Minute Maid Park on October 11, 2022 in Houston, Texas. (Photo by Carmen Mandato/Getty Images)

Yordan Alvarez smashed a game-ending, three-run homer with two outs in the ninth inning off Robbie Ray, wrecking Seattle’s strategy of using a Cy Young Award winner in a rare relief role and vaulting the Houston Astros over the Mariners 8-7 Tuesday in their playoff opener.

Trailing all game after a poor start by Justin Verlander, the AL West champion Astros overtook rookie star Julio Rodríguez and the wild-card Mariners at the end to begin their best-of-five Division Series.

Houston was down 7-5 when rookie pinch-hitter David Hensley reached with one out in the ninth as Seattle closer Paul Sewald grazed his jersey with a pitch.

Mariners manager Scott Servais then made the bold move to bring in Ray, who started Saturday at Toronto in the AL wild-card series, for a lefty vs. lefty matchup with Alvarez. Ray won the Cy Young last year with Toronto, had made only six relief appearances in his career and had never earned a pro save.

Alvarez, who hit 37 homers in the regular season, sent Ray’s second pitch deep into the seats in right field to set off a wild celebration with his parents in the stands.

The Mariners jumped on Verlander for six runs in just four innings to build a 6-2 lead early. Yuli Gurriel hit a solo homer in the Houston fourth before Eugenio Suarez’s solo shot in the seventh extended Seattle’s lead to 7-3.

A two-run homer by Alex Bregman off Andrés Muñoz cut the lead to 7-5 in the eighth inning to set up the dramatic finish.