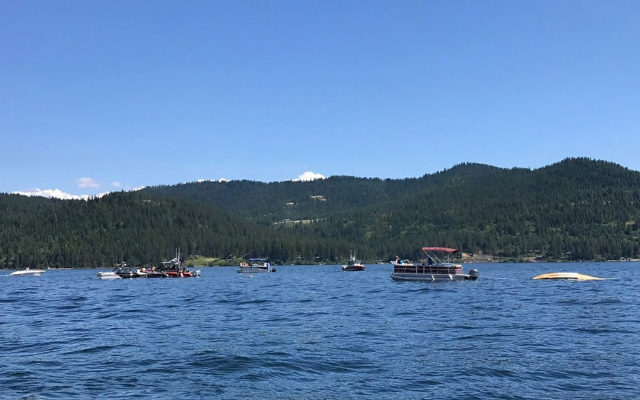 Boaters flag down authorities to a crashed seaplane near Powderhorn Bay on Lake Coeur d'Alene on Sunday, July 5, 2020, south of Coeur d'Alene, Idaho. The downed plane can be seen in the right side of the image. (Stephanie Hammett/The Spokesman-Review via AP)

“Our No. 1 goal is to find those last two victims,″ he said, noting they are likely more than 125 feet (40 meters) below the surface of the popular lake.

One of the aircraft in the Sunday collision was a float plane operated by Brooks Seaplane of Coeur d’Alene, Idaho, which conducts charter flights for tourists over the lake, the sheriff’s office said.

The plane was carrying five passengers, including three children, and a pilot.

The sheriff’s office has identified the pilot as Neil Lunt, 58, of Liberty Lake, Washington.

One passenger was identified as Sean K. Fredrickson, a golf instructor from Lake Oswego, Oregon. Also killed were his children, a 16-year-old girl, an 11-year-old boy and a 16-year-old boy. Their names were not released.

Another man on the plane has not been identified.

April Upchurch, Fredrickson’s wife and mother of the three children, asked people to keep her family in their prayers.

`I am reeling from the loss,” she said. ”But take solace in the fact that they were on an adventure and so excited for their first sea plane ride.″

The second airplane was a Cessna 206 that was carrying two people and was registered in Lewiston, Idaho, the sheriff’s office said. The identities of the people onboard have not been released.

Higgins said investigators from the National Transportation Safety Board and the Federal Aviation Administration were on the scene.

The planes collided near Powderhorn Bay, and recreational boaters rushed to the scene, but no survivors were found.

Higgins said the wreckage of the two airplanes is strewn across about 500 yards of the lake bottom. After all the bodies are recovered, the wreckage will eventually be lifted out of the lake.

“The loss of Sean Fredrickson and his children Hayden, Sofie and Quinn is devastating. Sean was an exceptional golf professional who was awarded the PGA Professional of the Year honor in 2019 by the Pacific Northwest Section PGA. Oswego Lake Country Club was honored to have him as a member of our family. His positive spirit and joy for the game of golf was contagious. But more importantly, Sean was a tremendous husband, father and friend. Our love and heartfelt sympathy goes to his wife, April, his family and friends during this time of loss.”