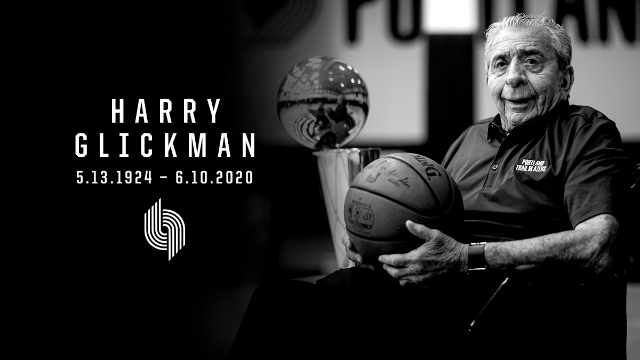 The former journalist, promoter, and sports executive also served as the team’s president from 1987 to 1994.

In 1960, he was one of the founders of the Portland Buckaroos of the Western Hockey League.

In 2019, he was honored with the John Bunn Award by the NBA’s Hall of Fame for a lifetime of achievement in the game.

The father of professional sports in Oregon, a true Trail Blazer.

We will miss you, Harry ❤️ pic.twitter.com/FaHj4yzMbO

Here is the full press release from the Trail Blazers Organization:

Glickman has long been considered the father of professional sports in Oregon, having brought a wide variety of sporting and entertainment events to the region over the course of his long and illustrious career. He was well known for his most famous mantra, “My word is my handshake.”

Glickman’s crowning achievement came in 1970 when the National Basketball Association granted Portland an expansion franchise. Glickman brought together the original ownership group of Herman Sarkowsky, Larry Weinberg and Robert Schmertz, who paid the NBA’s $3.7 million expansion fee.  Glickman was one of the shareholders who sold the club to Paul Allen in 1988.

Glickman served as the leader of the franchise, including as general manager, from its inception until his retirement in 1994, when he became president emeritus. Under his leadership, the Trail Blazers won the NBA Championship in 1977 and Western Conference championships in 1990 and 1992.  Also, during his tenure, the Trail Blazers set an American professional sports record by selling out 814 consecutive home games.

“The Trail Blazers have long been the beneficiary of Harry’s vision, generosity, and inspiration,” said Jody Allen, Chair of the Trail Blazers. “As the team’s founder and first General Manager, his leadership was instrumental in igniting our city’s pride and passion for sports. I am grateful for Harry’s many contributions to the franchise over the years. He will be missed by many.”

Glickman was born and raised in south Portland, graduated from Lincoln High School and in 1948 graduated with a degree in journalism from the University of Oregon. While at Oregon, Glickman worked as a stringer for the Oregon Journal. Following college, Glickman served three years in the U.S. Army, where he saw action in the European theater with the 12th Armored Division, for which he was awarded a Bronze Star.

Through the 1950’s, Glickman’s Oregon Sports Attractions promoted a wide range of events, including an annual NFL exhibition game at Multnomah Stadium (now Providence Park), the Shrine Football Game, the Harlem Globetrotters, and world championship boxing via closed-circuit television. Glickman also served as general manager of Multnomah Stadium in 1958 and 1959.

In 1960, Glickman founded the Portland Buckaroos hockey team that played in the newly built Veteran’s Memorial Coliseum. In the 12 seasons with Glickman at the helm as the club’s co-owner and president, the Bucks advanced to the Lester Patrick Cup championship seven times, winning three, including the inaugural 1960-61 season, and set numerous attendance records.

In 1964, Glickman had the assurance of an NFL expansion franchise from friend Pete Rozelle, who had become Commissioner, but Portland voters rejected the proposed 40,000-seat Delta Dome by a mere 10,000 votes.

“Harry was the definition of a true Trail Blazer,” said Chris McGowan, President & CEO of the Trail Blazers and Rose Quarter. “Through his dedication and persistence, Harry not only created a successful sports franchise in a small western market, but has united hundreds of thousands of people around the world through a shared love of basketball. Rip City will forever be thankful to Harry and his forgotten raincoat.”

Glickman was the recipient of numerous honors and awards including:

In 1977, Glickman published his autobiography, Promoter Ain’t A Dirty Word, which is a candid look inside the workings of the professional sports business in Portland.

“Harry Glickman laid the foundation and established the benchmark for small market success in the NBA,” said Neil Olshey, President of Basketball Operations. “He was the driving force that set the stage for the 1977 NBA Championship, a seminal moment that elevated Portland and allowed it to join the elite of professional sports franchises. His contributions to the city of Portland and the Trail Blazers are immense and for that we all owe him a great debt of gratitude.”

Due to the postponement of the NBA season, the Trail Blazers will announce how they plan to honor Glickman at a later date.

Glickman is survived by his wife, Joanne, son Marshall, daughters Jennifer and Lynn, grandsons Joel and Laz, and granddaughter Sydney.

There will be a private burial service for Glickman. A public memorial service will be held at Congregation Beth Israel at a later date.

To view a tribute video to Harry, please click here.