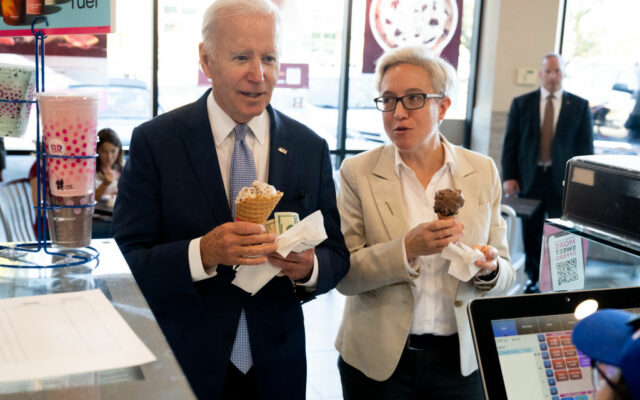 PORTLAND, Ore. (AP) — President Joe Biden strode into the telephone bank at a crowded union hall and eagerly began making calls and eating doughnuts — one frosted, one glazed — as he tries every page in the political playbook to deliver votes for Democrats.

Before leaving Portland on Saturday, the president attended a union hall reception for Kotek as he tried to boost her chances in a three-way race that could cost Democrats a reliably blue governor’s seat. He also gave a speech at a community center, warning that his administration’s progress “goes away, gone” if Republicans take control of Congress in the midterm elections.

Portland was the final stop on a four-day swing through Oregon, California and Colorado that has encapsulated Biden’s strategy for turning out voters on Election Day, Nov. 8: flex the levers of government to help boost candidates, promote an agenda aimed at strengthening an uncertain economy and haul in campaign cash.

And this: show up for candidates when Biden can be helpful, steer clear of places where a visit from a president with approval ratings under 50% isn’t necessarily a good thing.

Throughout the trip, Biden had to compete for the spotlight and contend with a troubling new inflation report and rising gas prices.

“Folks are still struggling. We can’t kid ourselves about that,” Biden said Saturday.

He touted Democratic legislation that he says will fight climate change with clean energy incentives and limit the cost of prescription drugs, saying that “we’re fighting for folks who need our help.”

In Oregon, Democratic officials hope that Biden can help consolidate the party’s support behind Kotek. The party is in danger of losing the governor’s race in the traditional Democratic stronghold as Betsy Johnson — who has quit both the Democratic and Republican parties — has run a well-financed race against Kotek and the GOP nominee Christine Drazan.

Biden said Kotek has the “heart of a lion,” and he described her as “an articulate, tough, committed woman.”