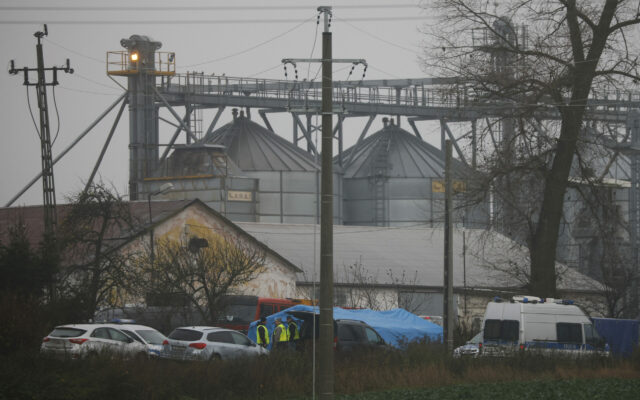 Police officers work outside a grain depot where, according to the Polish government, an explosion of a Russian-made missile killed two people in Przewodow, Poland, Wednesday, Nov. 16, 2022. Poland said Wednesday that a Russian-made missile fell in the country’s east, killing two people, though U.S. President Joe Biden said it was "unlikely” it was fired from Russia. (AP Photo/Michal Dyjuk)

PRZEWODOW, Poland (AP) – Poland says there is “absolutely no indication” that a missile which came down in Polish farmland, killing two people, was a deliberate attack.

The NATO chief made a similar statement. Poland’s president said Wednesday that neighbor Ukraine likely launched the Soviet-era projectile as it was fending off a Russian air assault that savaged its power grid.

The missile came down Tuesday, as Russia was savaging the Ukrainian power grid with missiles and exploding drones.

Poland said the missile was Russian-made. U.S. President Joe Biden said it was “unlikely” that Russia fired the missile.

Three U.S. officials said preliminary assessments suggested it was fired by Ukrainian forces at an incoming Russian one.