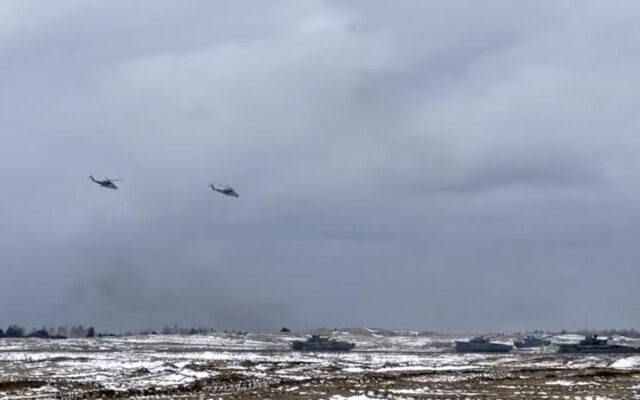 BRUSSELS (AP) — President Joe Biden is sending about 2,000 U.S.-based troops to Poland and Germany and shifting 1,000 soldiers from Germany to Romania as demonstrations of American commitments to allies on NATO’s eastern flank amid fears of a Russian invasion of Ukraine, the Pentagon said Wednesday.

“These are not permanent moves,” he said, stressing that the purpose is to reassure allies at a time of heightened tension over Russia’s buildup of an estimated 100,000 troops along Ukraine’s borders. Kirby said the Russian buildup has continued, even in the last 24 hours, despite U.S. urgings that it deescalate.

The newly announced U.S. troop deployments are in line with expectations based on Biden administration efforts to reassure allies and demonstrate U.S. resolve without undermining efforts to find a diplomatic solution to the Ukraine crisis.

The U.S. already has several thousand troops in Poland, and Romania is host to a NATO missile defense system that Russia considers a threat to its security. Biden notably has not sent American military reinforcements to the three Baltic countries on NATO’s eastern flank — Estonia, Latvia and Lithuania — that are former states of the Soviet Union.

Of the 2,000 deploying from Fort Bragg, North Carolina, about 1,700 are members of the 82nd Airborne Division infantry brigade, who will go to Poland. The other 300 are with the 18th Airborne Corps and will deploy to Germany as what the Pentagon called a “joint task force-capable headquarters.”

Poland’s Defense Minister Mariusz Blaszczak wrote on Twitter that the U.S. deployment to his country is “a strong signal of solidarity in response to the situation in Ukraine.”

The 1,000 U.S. troops going to Romania are members of the 2nd Cavalry Regiment based at Vilseck, Germany. They will augment the approximately 900 U.S. troops already in Romania, Kirby said.

The cavalry deployment’s purpose is to “deter aggression and enhance our defensive capabilities in frontline allied states during this period of elevated risk,” the Pentagon said in a separate written statement.

“It’s important that we send a strong signal to Mr. Putin and to the world” of the U.S commitment to NATO, Kirby said.

He said France has decided it, too, will send troop reinforcements to Romania under NATO command, and he noted that a number of other European NATO countries are considering adding forces on NATO’s eastern flank.

NATO has been beefing up its defenses around allies in eastern Europe since late last year. Denmark, for example, said it was sending a frigate and F-16 warplanes to Lithuania, and Spain was sending four fighter jets to Bulgaria and three ships to the Black Sea to join NATO naval forces. The Netherlands plans to send two F-35 fighter aircraft to Bulgaria in April and is putting a ship and land-based units on standby for NATO’s Response Force.

Biden has said he will not put American troops in Ukraine to fight any Russian incursion, although the United States is supplying Ukraine with weapons to defend itself and seeking to reassure allies in Eastern Europe that Washington will fulfill its treaty obligation to defend them in the event they are attacked. Ukraine is not a NATO member and therefore the U.S. has no treaty obligation to come to its defense.

The military moves come amid stalled talks with Russia over its military buildup at Ukraine’s borders. And they underscore growing fears across Europe that Russian President Vladimir Putin is poised to invade Ukraine. Smaller NATO countries on the alliance’s eastern flank worry they could be next, although Russia has said it has no intention of initiating conflict and is willing to continue diplomatic efforts.

Biden had said recently that he intended to provide additional U.S. forces to NATO allies in Eastern Europe as reassurance of an American commitment to treaty allies.

The Pentagon also has put about 8,500 U.S.-based troops on higher alert for possible deployment to Europe as additional reassurance to allies, and officials have indicated the possibility that additional units could be placed on higher alert soon. The U.S. already has between 75,000 and 80,000 troops in Europe as permanently stationed forces and as part of regular rotations in places such as Poland.

Washington and Moscow have been at loggerheads over Ukraine, with little sign of a diplomatic path forward. Kirby on Wednesday confirmed the validity of a document reported by a Spanish newspaper that indicated the United States could be willing to enter into an agreement with Russia to ease tensions over missile deployments in Europe if Moscow steps back from the brink in Ukraine.

The daily El Pais published two documents that Kirby confirmed were written replies from the United States and NATO last week to Russia’s proposals for a new security arrangement in Europe. The U.S. State department declined to comment on them.

In reference to the second document, NATO said that it never comments on “alleged leaks.” But the text closely reflects statements made to the media last week by NATO Secretary-General Jens Stoltenberg as he laid out the 30-nation military organization’s position on Russia’s demands.

The U.S. document, marked as a confidential “non-paper,” said the United States would be willing to discuss in consultation with its NATO partners “a transparency mechanism to confirm the absences of Tomahawk cruise missiles at Aegis Ashore sites in Romania and Poland.”

That would happen on condition that Russia “offers reciprocal transparency measures on two ground-launched missiles bases of our choosing in Russia.”

Aegis Ashore is a system for defending against short- or intermediate-range missiles. Russia argues the site in Romania could be easily adapted to fire cruise missiles instead of interceptors, which ram their target and do not carry warheads, a claim that Washington has denied.

Putin again mentioned the possibility Tuesday, saying that “there are MK-41 launchers there that could be configured for firing Tomahawks.” He said they “are offensive systems that could reach thousands of kilometers into our territory. Isn’t that a threat to us?”

Fears of a Russian invasion of Ukraine have mounted in recent months, after Putin deployed more than 100,000 troops to areas near Ukraine’s borders, including in neighboring Belarus, backed by tanks, artillery, helicopters and warplanes. Russian officials have insisted that Moscow has no intention of invading.

In his first public remarks on the standoff in more than a month, Putin on Tuesday accused the U.S. and its allies of ignoring Russia’s central security demands but he said that Moscow is willing to talk more to ease tensions over Ukraine.

His remarks suggested that a potential Russian invasion may not be imminent and that at least one more round of diplomacy is likely.

After talks in Kyiv Wednesday with Ukrainian President Volodymyr Zelenskyy, Dutch Prime Minister Mark Rutte underlined that “it is essential for dialogue to continue.” If not, Rutte, said, “it is clear that further aggression against Ukraine will have serious consequences.”

At a NATO summit in 2008, NATO leaders said that they welcomed Ukraine’s and Georgia’s aspirations to join NATO but decided not to offer either country a formal path to eventual membership.

Russia invaded Georgia later that year and in 2014 annexed Ukraine’s Crimean Peninsula. Around 14,000 people have been killed in the conflict that still simmers in eastern Ukraine. Their membership plans have been on hold for years, although NATO continues to support them and promote reforms.