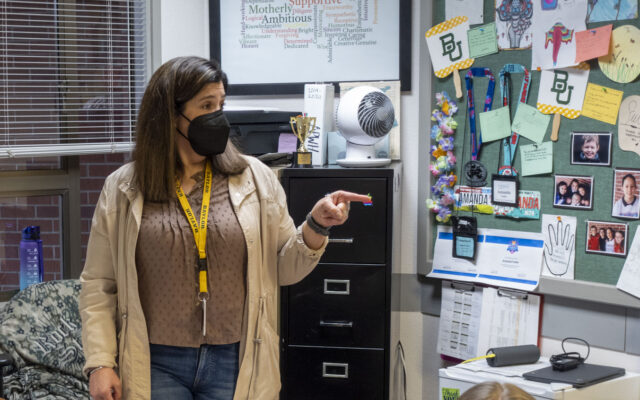 Battle Ground, Wash. – Battle Ground High School world history teacher Amanda Fulfer is headed to Poland this July as a part of a program put on by the Holocaust Center for Humanity.

Fulfer tells KXL News “It’s a once in a life time opportunity.”

Fulfer says her background is in East Asian studies, but at the beginning of the pandemic when schools switched to online and changed some of its curriculum, she was told she’d be the only one teaching a brand new European history class and had to figure out how to prepare for it on her own. While prepping she quickly became fascinated by the story of the Holocaust and felt a calling to share those stories from that period to future generations. In Poland she’ll visit Auschwitz Birkenau, the Warsaw Ghetto and Schindler’s factory, saying it will give her a powerful perspective into what she teaches

“There’s always that cliché, that if you don’t learn history you’re bound to repeat it,” Fulfer said “But I think it’s more than that. I think we need to learn history, and learn to empathize and care about history so we make informed decisions in the future.”

In her class, Fulfer uses the Holocaust as foundational material to teach about genocide that occurred after it, like in Rwanda, Sudan or the Uyghur’s in China. She then asks her students to try to figure out why this keeps happening. And while she knows it’s her altruistic nature thinking we can live in a world where this atrocity doesn’t exist, she says the only way to inspire students to make change is to teach them about it.

“My thought is, if I can get how many ever students I reach, to change. To stand up and make a change, just think about how much we could effect.”

As she journeys to Poland this summer, the direct neighbor to Ukraine, she can’t help but think about the current invasion in that country, and how like the Holocaust, it is driven solely based on identity.

Fulfer, who also teaches about refugee crisis, says the conflict makes her want to go Poland even more. She plans to bring medical supplies and help when she can amid her busy 10-day schedule.

While the pandemic did a number on schools, Fulfer says, this trip, and her new found passion for studying the Holocaust, may have never happened without life going virtual. Adding that professional development opportunities that are often across the country, became online and free. Her quest for knowledge didn’t stop there. Joining a Holocaust book club, and taking classes with the Dallas, Portland and Seattle Holocaust Museums. Eventually joining the Washington State cohort of history teachers, which is how she heard about this trip to Poland.

Currently Fulfer is also working to get Washington State to pass legislation that would make Holocaust curriculum mandatory.