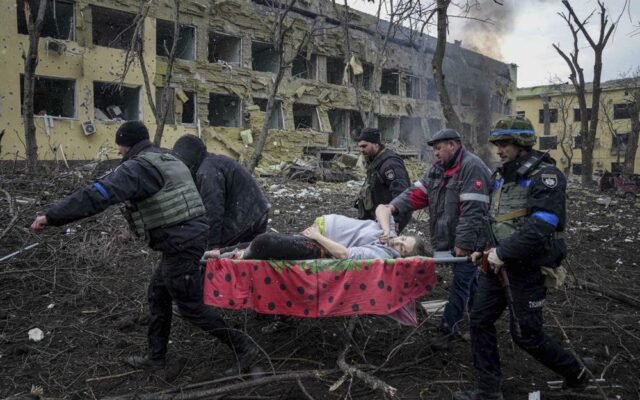 MARIUPOL, Ukraine (AP) — A Russian airstrike on a Mariupol maternity hospital that killed three people brought condemnation down on Moscow on Thursday, with Ukrainian and Western officials branding it a war crime, while the highest-level talks yet yielded no progress in stopping the fighting.

Emergency workers renewed efforts to get food and medical supplies into besieged cities and get traumatized civilians out.

Ukrainian authorities said a child was among the dead in Wednesday’s airstrike in the vital southern port of Mariupol. In addition to the dead, 17 people were wounded, including women waiting to give birth, doctors, and children buried in the rubble.

Images of pregnant women covered in dust and blood dominated news reports in many countries and brought a new wave of horror over the 2-week-old war sparked by Russia’s invasion, which has killed thousands of soldiers and civilians, shaken the foundations of European security and driven more than 2 million people from Ukraine.

Ukrainian President Volodymyr Zelenskyy told Russian leaders that the invasion will backfire on them as their economy is strangled. Western sanctions have already dealt a severe blow to the economy, causing the ruble to plunge, foreign businesses to flee and prices to rise sharply.

“You will definitely be prosecuted for complicity in war crimes,” he said in a video address. “And then, it will definitely happen, you will be hated by Russian citizens — everyone whom you have been deceiving constantly, daily, for many years in a row, when they feel the consequences of your lies in their wallets, in their shrinking possibilities, in the stolen future of Russian children.”

Millions more have been displaced inside the country. Kyiv Mayor Vitali Klitschko said Thursday that about 2 million people — half the population of the capital’s metropolitan area — have left the city, which has become virtually a fortress.

“Every street, every house … is being fortified,” he said. “Even people who in their lives never intended to change their clothes, now they are in uniform with machine guns in their hands.”

Bombs fell on two hospitals in a city west of Kyiv on Wednesday, its mayor said. The World Health Organization said it has confirmed 18 attacks on medical facilities since the invasion began.

Western officials said Russian forces have made little progress on the ground in recent days. But they have intensified the bombardment of Mariupol and other cities, trapping hundreds of thousands of people, with food and water running short.

Temporary cease-fires to allow evacuations and humanitarian aid have repeatedly faltered, with Ukraine accusing Russia of continuing its bombardments. But Zelenskyy said 35,000 people managed to get out on Wednesday from several besieged towns, and more efforts were underway on Thursday in eastern and southern Ukraine — including Mariupol — as well as in the Kyiv suburbs.

The Mariupol city council posted a video showing buses driving down a highway. It said a convoy bringing food and medicine was on the way despite several days of thwarted efforts to reach the city.

“Everyone is working to get help to the people of Mariupol. And it will come,” said Mayor Vadym Boychenko.

Images from the city, where hundreds have died and workers hurried to bury bodies in a mass grave, have drawn condemnation from around the world. Residents have resorted to breaking into stores for food and melting snow for water. The city has been without heat for days as nighttime temperatures fall below freezing and daytime ones hover just above it.

“The only thing (I want) is for this to be finished,” Volodymyr Bykovskyi said as he stood by a freshly dug trench where bodies were being buried. “I don’t know who’s guilty, who’s right, who started this. Damn them all, those people who started this!”

When the series of blasts hit the children’s and maternity hospital in Mariupol, the ground shook more than a mile away. Explosions blew out windows and ripped away much of the front of one building. Police and soldiers rushed to the scene to evacuate victims, carrying a bleeding woman with a swollen belly on a stretcher past burning and mangled cars. Another woman wailed as she clutched her child.

Regional Ukrainian police official Volodymir Nikulin, standing in the ruins, called the attack “a war crime without any justification.” Britain’s Armed Forces minister, James Heappey, said that whether the hospital was hit by indiscriminate fire or deliberately targeted, “it is a war crime.”

U.S. Vice President Kamala Harris, on a visit to Ukraine’s neighbor Poland, backed calls for an international war-crimes investigation into the invasion, saying, “The eyes of the world are on this war and what Russia has done in terms of this aggression and these atrocities.”

Russian Foreign Minister Sergey Lavrov dismissed concerns about civilian casualties as “pathetic shrieks” from Russia’s enemies. He claimed without providing evidence that the Mariupol hospital had been seized by far-right radical fighters who were using it as a base — despite the fact that photographs from the aftermath showed pregnant women and children at the site.

Several rounds of talks have not stopped the fighting, and a meeting in a Turkish Mediterranean resort between Lavrov and his Ukrainian counterpart, Dmytro Kuleba, failed to find much common ground.

In their highest-level talks since the war began, the two sides discussed a 24-hour cease-fire but did not make progress, Kuleba said. He said Russia was still seeking “surrender from Ukraine.”

“This is not what they are going to get,” he said, adding that he was willing to continue the dialogue.

Lavrov said Russia was ready for more negotiations but showed no sign of softening Moscow’s demands.

Russia has alleged that Western-looking, U.S.-backed Ukraine poses a threat to its security. Western officials suspect Russian President Vladimir Putin wants to install a government friendly to Moscow in Kyiv as part of an effort to draw the former Soviet state back into its orbit.

In Kharkiv, Ukraine’s second-largest city, 91-year-old Alevtina Shernina sat wrapped in a blanket, an electric heater at her feet, as cold air blew in through a damaged window. She survived the brutal World War II siege of Leningrad, now St. Petersburg, and is now under siege again, her health too fragile for her to be moved.

Her daughter-in-law Natalia said she was angry that Shernina “began her life in Leningrad under the siege as a girl who was starving, who lived in cold and hunger, and she’s ending her life” in similar circumstances.

“There were fascists there and there are fascists here who came and bombed our buildings and windows,” she said.