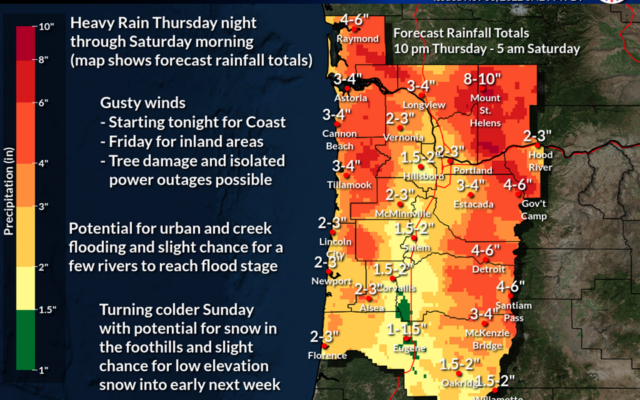 One of the most popular questions we’ve been getting is, “How much rain are we going to get?”

Bottom line is that today will probably be our wettest day so far this season. pic.twitter.com/DeMUhoF0AS

Snow in the passes is expected as is potential river flooding.

Jeff Michalski, a meteorologist with the National Weather Service in Seattle, said to expect heavy rainfall across the region, including western Oregon, through Saturday evening, with the heaviest amounts over the Olympic and Cascade mountains.

Tree damage and some power outages are possible, according to the weather service. A portion of west central Washington, including the Seattle area, is under a flood watch through Saturday afternoon.

“Attention boaters and mariners: we’re expecting high seas and strong winds the next few days, starting tonight, for the coastal waters of SW WA & NW OR,” the weather service said in a tweet. “It’s a good time to stay on land.”

Atmospheric river storms are fueled by long and wide plumes of moisture pulled in from the Pacific.

A cooler air mass with temperatures in the 30s and 40s Fahrenheit is expected starting Sunday and continuing next week with lows in the 20s and a small chance of low elevation snow, the weather agency said.

“Certainly the air mass is cool enough to support any snowfall,” Michalski said.