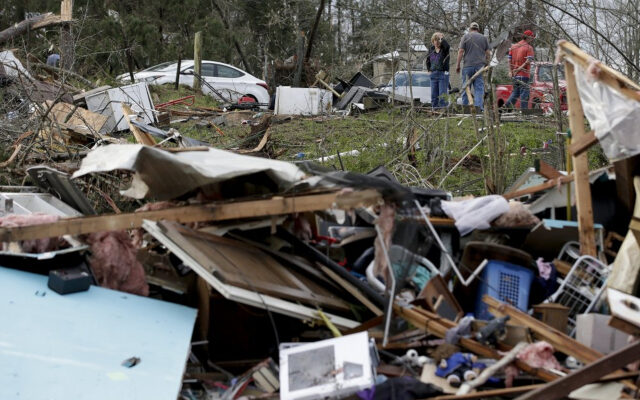 Residents begin the clean up process after a tornado touched down damaging multiple homes Friday, March 26, 2021 in Wellington, Ala. (AP Photo/Butch Dill)

A day earlier, a sheriff in eastern Alabama said a tornado cut a diagonal line through his county, striking mostly rural areas.

“Five people lost their lives and for those families, it will never be the same,” Calhoun County Sheriff Matthew Wade said at briefing Thursday evening.

One of the victims in the hard-hit town of Ohatchee in eastern Alabama, a small community of about 1,170 people, was Dwight Jennings’s neighbor. The 72-year-old Geno was known to his friends as J.W. and in his youth had been a rodeo bull rider. Geno could make anything out of wood, Jennings said, and he loved to catfish. The two of them had planned to go fishing this weekend, Jennings said. Jennings spent several hours searching for his friend’s dog before the animal was found alive, he said.

As many as eight tornadoes might have hit Alabama on Thursday, said John De Block, a meteorologist with the National Weather Service in Birmingham. Multiple twisters sprang from a “super cell” of storms that later moved into Georgia, he said.

Reports of tornado damage in the Newnan area began coming in shortly after midnight. Trees were toppled and power lines downed, knocking out service by the local utility.

Newnan police urged the public in a Facebook post to “get off the roads” while emergency officials surveyed the damage.

The bad weather stretched across the southern U.S., raising concerns of thunderstorms and flooding in parts of Tennessee, Kentucky and the Carolinas. In Tennessee, emergency responders hospitalized one person in Sumner County, and the Nashville Fire Department posted photos on Twitter showing large trees down, damaged homes and streets blocked by debris.

In Ohio, more than 100,000 people were without power early Friday after thunderstorms delivered 50 mph (80 kph) wind gusts to parts of the state. Forecasters reported peak gusts of 63 mph (100 kph) in Marysville.

Some school districts from Alabama to Ohio canceled or delayed class Friday due to damage and power outages.

Authorities said one tornado carved up the ground for more than an hour Thursday, traveling roughly 100 miles (160 kilometers) across Alabama. Vast areas of Shelby County near Birmingham — the state’s largest city — were badly damaged.

In the city of Pelham, James Dunaway said he initially ignored the tornado warning when it came over his phone. But then he heard the twister approaching, left the upstairs bedroom where he had been watching television and entered a hallway — just before the storm blew off the roof and sides of his house. His bedroom was left fully exposed.

Firefighters outside a flattened home in the Eagle Point subdivision, also in Shelby County, said the family that lived there made it out alive. Nearby homes were roofless or missing their second stories.

Farther west in the city of Centreville, south of Tuscaloosa, Cindy Smitherman and her family and neighbors huddled in their underground storm pit as a twister passed over their home.

A tree fell on the shelter door, trapping the eight inside for about 20 minutes until someone came with a chain saw to help free them, said Smitherman, 62. The twister downed trees, overturned cars and destroyed a workshop on the property.

Centreville Mayor Mike Oakley told ABC 33/40 news that a local airport was hit. “We have airplanes torn apart like toys. We’ve got homes along here that are totally destroyed, trees down, power lines down. It’s pretty devastating.”

First lady Jill Biden postponed a trip to Birmingham and Jasper, Alabama, that she had planned for Friday because of the severe weather, her office said.

“Thinking of everyone in Alabama and all of those impacted by the severe weather across the South tonight. My prayers are with the grieving families. Please stay safe,” Biden tweeted late Thursday.

Earlier, Alabama Gov. Kay Ivey issued an emergency declaration for 46 counties, and officials opened shelters in and around Birmingham.