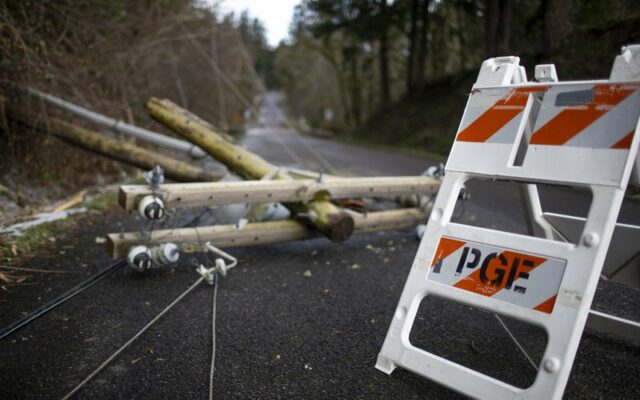 PORTLAND, Ore. (AP) — Gov. Kate Brown on Friday called on the Oregon National Guard to go door-to-door in areas hardest hit by last weekend’s ice storm as utility company crews worked around the clock to restore power to 60,000 residents who have been without electricity for a week.

The damage and dangerous conditions left behind by the storm, which came in three waves starting Feb. 12, is the worst in the history of Portland General Electric, CEO Maria Pope said. Crews were not able to safely enter the worst-hit areas for 48 hours because trees laden down with hundreds of pounds of ice were falling constantly, the utility said.

Even now, progress is slow because of “widow-maker” branches and trees dangling high above downed power lines. Seventy-five timber crews are working alongside utility crews to remove the trees before work can begin on restoring the power grid.

About 36,000 people remained without power in Clackamas County, to the south of Portland, Oregon, and another 21,000 were in the dark in and around the state capital of Salem, about 45 miles south of Portland. Some residents in the worst-hit areas might not see power restored until early next week or possibly later, Pope said.

At least four people have died in Oregon and dozen more were sickened after inhaling carbon monoxide fumes as they tried to keep warm by bringing propane heaters and charcoal grills inside or running gas-fed generators indoors. And one man died Sunday after his car slid on an icy bridge and plunged into the Columbia River.

“This is by far the most destructive ice event in 40 years. That ice coated our wires and trees and thousands of pounds of ice did significant damage across our lines and poles and the trees in our service area,” said Larry Bekkedahl, the utility’s vice president of grid architecture, integration and systems operation.

Two hundred power poles arrived Thursday to replace dozens that snapped under ice and downed trees. Work crews from Montana and Nevada are also on site.

The worst damage was from Colton to north Marion County and between Salem and Oregon City. About 12,000 people in Salem itself remained without power Friday afternoon as well.

Clackamas County Chairperson Tootie Smith said the deployment of the National Guard was crucial because many elderly and medically fragile residents were unable to leave their homes to get to warming centers set up in her county. A warming center at Oregon City High School will offer flashlights, batteries, charging stations, food and hot showers to residents on Saturday.

“We need assistance from the state in order to make every effort to help residents without the basics to survive while we all get through this,” she said.

Crews have repaired 330 miles of power lines and “with every mile, we find additional damage,” Bekkedahl said.