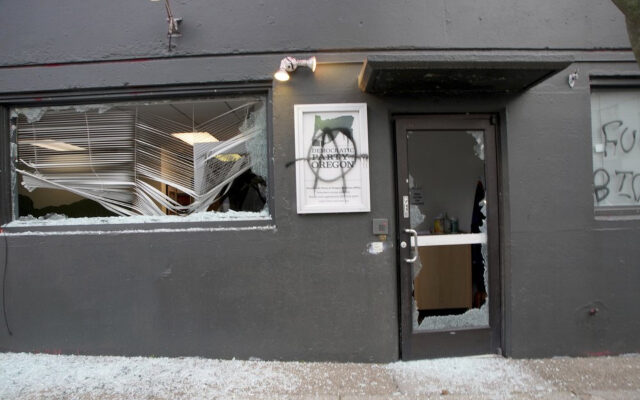 A group of protesters carrying anti-President Joe Biden and anti-police signs marched in the streets and damaged the headquarters of the Democratic Party of Oregon, Wednesday, Jan. 20, 2021, in Portland, Ore. (Beth Nakamura/The Oregonian via AP)

PORTLAND, Ore. — At least 14 people were arrested on a variety of charges during Inauguration Day demonstrations in Portland.

Here’s our last video update for the night. Thanks for coming here for verified public safety information! pic.twitter.com/E062Gcn7cl

A crowd left Revolution Hall in Southeast Portland and marched to the Democratic Party of Oregon where they smashed windows and vandalized the building before moving towards Buckman Park.  Officers identified several suspects responsible for damage and criminal activity.  Several arrests were made near the park and during traffic stops.  Police say the crowd dispersed on its own without any further use of force.

The following people were arrested:

Police responded to a roll-over crash near Northeast 6th and Fremont.  A planned event was underway at nearby Irving Park.  People from the gathering descended on the crash, climbed on the vehicle, and appeared to begin trying to get people out.  As officers arrived, the crowd shouted at them.  Back-up was called to clear out the crowd and allow police to reach the victims.  There did not appear to be any injuries.

Portland: An occupied car is flipped on its side in northeast Portland: pic.twitter.com/loZUJ81lfF

A group marched from Irving Park and blocked streets as they marched through inner Northeast Portland.

Later, people began gathering at Elizabeth Caruthers Park in South Portland and a crowd walked to the Immigration and Customs Enforcement (ICE) offices where graffiti was sprayed on the building.  Federal officers moved in to push the crowd away.  Portland Police circulated the neighborhood and made several probable cause arrests before the crowd dissipated.