Another Night Of Fires & Criminal Activity Outside Federal Courthouse 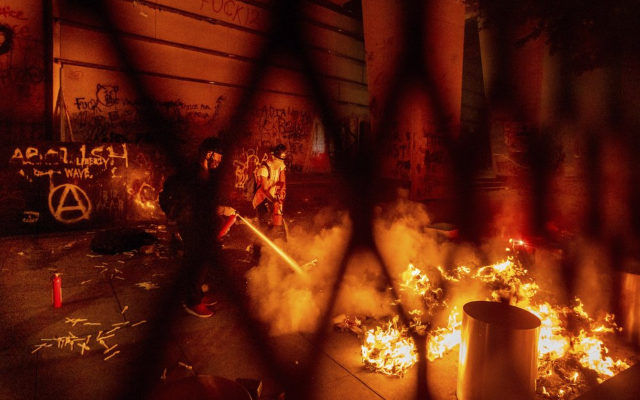 Portland Police say they did not engage a crowd of more than a thousand people who gathered on Southwest 3rd Avenue outside the Multnomah County Justice Center and Federal Courthouse in downtown Portland and did not make arrests.

The group blocked traffic for several hours.  Around 11:00pm, demonstrators set fires inside the fence that protects the federal courthouse, threw items including explosives at federal officers and shined lasers at them while some members of the crowd tried to disassemble the fence.  Several people breached that perimeter and were engaged by the feds, who dispersed the crowd.

A few hundred people returned to the area around 1:00am and continued to set fires, cut the fence and launch commercial grade fireworks towards the courthouse.  The feds once again broke up most of the crowd.  Several people remained in the the streets, engaging in violent and criminal behavior.  Portland Police declared an unlawful assembly over the public address system.

The activity outside of the Federal Courthouse has been deemed an unlawful assembly. Disperse to the north and/or west. Disperse immediately. Failure to adhere to this order may subject you to arrest or citation, or riot control agents, including tear gas and/or impact weapons.

Many people stayed in the area and continued to light fires and damage federal property over the next few hours before calling it a night.

FBI Portland Division Special Agent in Charge Renn Cannon released the following statement: “The FBI’s role is to investigate violent crime and hold those accountable who are engaging in violent acts or significant destruction of property. Our investigations involve specific violations of federal law, including arson, the use of improvised explosive devices, and interstate transportation of stolen goods. The Portland FBI seeks to work closely with our local law enforcement partners to ensure the community is safe and people are free to exercise their First Amendment rights in a peaceful manner. The FBI can never initiate an investigation based solely on an individual’s race, ethnicity, national origin, or religion. Our focus is not on membership in particular groups but on individuals who commit violence and criminal activity that constitutes a federal crime or poses a threat to national security. The FBI does not and will not police ideology.”