An SUV Crashes Into A Kelso Home 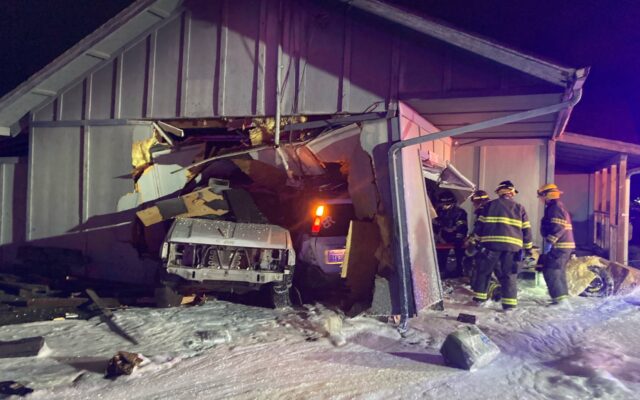 KELSO, Wa– Just after 7 PM last night Cowlitz 2 Fire & Rescue (C2FR) responded to a reported vehicle into a house in the 1300 block of South Pacific AVE.  Initial 911 callers reported the vehicle was occupied, smoking but too far into the house to describe vehicle or patient condition.  Cowlitz 2 Fire & Rescue crews arrived within 4 minutes of dispatch to find an SUV completely buried into a garage with significant damage to the residence. Responders determined the structure to be safe enough for emergent rescue operations and used heavy hydraulic cutters to cut their way through the garage to the SUV where they located the driver and his dog. The driver was rapidly extricated and transported emergently to St. John ED by C2FR Paramedics. Leaking gasoline from the vehicle fuel tanks complicated operations forcing firefighters to maintain blanket of firefighting foam continuously in the area of firefighters and victims.

During the extrication of the driver the homeowner advised that there were 6 dogs staying in the garage and he couldn’t locate them. After crews re-evaluated the stability of the structure they were able to search and locate all of the dogs, who were uninjured.

Further investigation of the scene revealed that the SUV had left Pacific Ave at a high rate of speed, crashed into a parked jeep on the outside of the house, then pushed the  jeep and itself fully trough an exterior wall and then into an interior wall of the occupied residence. The force of the vehicles striking the wall propelled the resident that was laying on a couch across his living room. The resident was evaluated by an additional ambulance brought to the scene and he declined aid or transport to a hospital..