An Interview with writer/director/actor Clark Duke 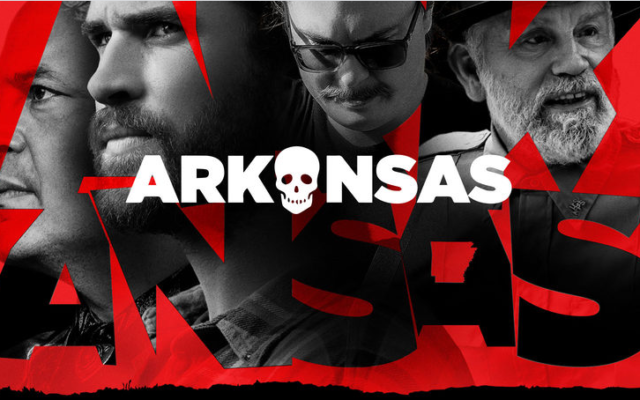 In Brief: Writer/director/actor Clark Duke’s first film as a writer and director is Arkansas. It’s streaming on a number of different platforms. A couple of weeks ago he and I talked about his movie, acting, writing and films that he loves.

In addition to the audio, I am including my review of his film in this post. The review is below but do take the time to hear the interview. Clark Duke is an interesting guy with a wonderful perspective on filmmaking.

Defining exactly how to categorize Arkansas is tough. I interviewed Duke last Thursday. That interview will be posted on Thursday. Part of our conversation centered on the film’s genre. Some — he said — have called it a comedy. Others a thriller. Still others a crime drama.

To start with it is dark. No. Make that dark done in a light sort of way. Humorous in a sometimes tongue-in-cheek way but not funny. Quirky? Quentin Tarantino light? Coen Brothersish?

Maybe not. Since I probably should settle, crime drama is the best definition. But it’s really not one. It is — to quote wiser minds than mine — what it is.

What my rambling does tell you is that Duke’s movie isn’t for everyone. However, if the genres hinted at above are your thing, you’ll at least like this film and even if you don’t love it, you’ll have a good time and will see the potential of Clark Duke as a filmmaker.

For sure this one makes me want to see more.

Here’s the plot. Swin and Kyle are low-level drug runners employed by a shadowy kingpin named Frog. They’re teamed up to deliver product to a park ranger. The two guys aren’t real bright and something goes wrong with the delivery. So Frog decides to have them work directly for the park ranger.

There are rules that go along with their — shall we call it — confinement. No partying. No friends and especially no girlfriends. Swin — to Kyle’s chagrin — immediately breaks that rule and becomes deeply involved with Johana.  Then something goes really, really wrong and Swin and Kyle are no doubt going to take the fall.

How the fall comes about, the backstory about how Frog becomes Frog and the relationship of the two guys with each other, the woman and the ranger is fun — and here we are again — hard to define filmmaking. Duke and his co-writer Andrew Boonkrong have woven together a long, but fascinating and deep character study of some very shallow people.

Cast chemistry is important to this kind of project. Duke, Hemsworth, Malkovich, Vaughn, Brolin and Vivica A. Fox have it in spades. They’re all very good but Hemsworth, Duke, Malkovich and Vaughn doing the heavy lifting.

And that lifting is very heavy.

Hemsworth plays the responsible half of the duo and Duke excels at irresponsible. They offer a lot of the same kind of buddy-movie dilemmas found in other films. You aren’t offered up a lot of surprises but that’s not necessarily a bad thing.

My favorite part of the movie comes from Vaughn and Frog’s backstory. Every time Vaughn has moved away from dopey comedies, he’s shown us that he’s a very good actor. He is perfectly cast as the film’s main villain and plays Frog like the stereotypical door-to-door vacuum cleaner salesman. The smile says trust me but you don’t. Frog has perfected the art of glad handing and Vaughn’s million dollar smile hides a heart that is cold, calculating and cruel.

Duke’s movie is based on a novel done by John Brandon in 2008. It is done in pieces. You meet the two guys and then the park ranger. Then you get to know Frog and his backstory. After that you go back to the guys, the ranger, the girlfriend and disaster.

All that requires time. Most movies ought to clock in at 90-minutes. They don’t and some run two-hours and are usually packed with unnecessary scenes and b-roll that slow them down. I can forgive that.

I can’t forgive anything longer when they’re loaded with extras that add very little to the story or the movie.

Once in awhile, a story needs some length. That’s the case with Duke’s movie. While it’s a little long and a bit indulgent, it really can’t be shortened.  Arkansas needs to be the length it is to be the movie it had to be.

While it sounds like I’m talking in circles, I’m not. Very little in this movie can be cut. The story and its conclusions need to be this length. And when movies are done the way Duke does this one, they don’t seem that long.

At least it didn’t to me.

That leads us back to defining Arkansas. Earlier I wasn’t able to quite pin down the genre. Here’s what Arkansas isn’t. It’s not the pablum you’ve been force-feeding yourself for the last five or six weeks on the channels you stream.

I had a good time visiting Clark Duke’s Arkansas. This is heavy drama and a film packed with fun twists and turns and Duke’s first film shows real promise. Give this a 4 on the Friday Flicks with Gary 0 to 5 scale.

You can find Arkansas on a number of streaming sources.