American Sentenced To 16 Years In Russia On Spying Charges 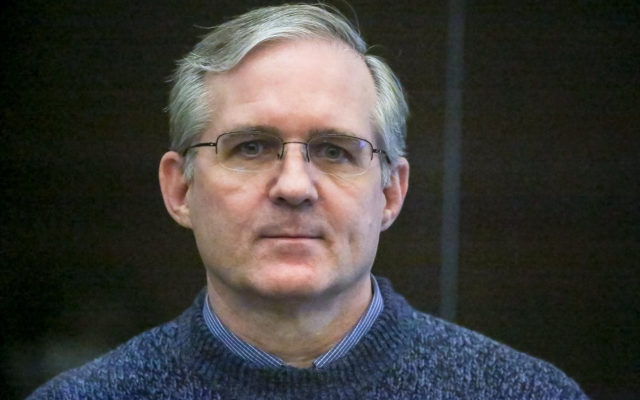 Paul Whelan, a former U.S. marine who was arrested for alleged spying, listens to the verdict in a courtroom at the Moscow City Court in Moscow, Russia, Monday, June 15, 2020. The Moscow City Court on Monday convicted Paul Whelan on charges of espionage and sentenced him to 16 years in maximum security prison colony. Whelan has insisted on his innocence, saying he was set up. The U.S. Embassy has denounced Whelan's trial as unfair, pointing that no evidence has been provided. (Sofia Sandurskaya, Moscow News Agency photo via AP)

MOSCOW (AP) — A Russian court convicted an American corporate security executive Monday of espionage and sentenced him to 16 years in prison after a closed trial that the U.S. denounced as a “mockery of justice,” and it angrily said his treatment in jail was “appalling.”

Paul Whelan, a former Marine from Novi, Michigan, has insisted he was innocent, saying he was set up when he was arrested in Moscow in December 2018 while he was visiting Russia to attend a friend’s wedding.

”We have serious concerns that Mr. Whelan was deprived of the fair trial guarantees that Russia is required to provide him in accordance with its international human rights obligations,” U.S. Secretary of State Mike Pompeo said in a statement.

The 50-year-old Whelan, who also holds British, Irish and Canadian citizenship, has publicly complained of poor prison conditions and has said his life is in danger. Two weeks ago, Whelan underwent a hernia operation, which his twin brother, David, described as “emergency surgery … which is never a good sign.”

He said his brother had been allowed one phone call in 18 months and had voiced concern about coronavirus infections in Moscow’s Lefortovo prison, where he was being held.

Pompeo said the U.S. was “outraged” by the verdict and noted that Paul Whelan’s treatment “has been appalling,” adding that authorities ignored his medical condition and kept him isolated from family and friends.

He called the proceedings “a secret trial, with secret evidence and without appropriate allowances for defense witnesses.” The Moscow City Court, where the trial took place, said it was held behind closed doors because authorities saw it as necessary for considering sensitive information.

Speaking to reporters after the verdict, U.S. Ambassador John Sullivan called the trial “a mockery of justice.” Whelan’s lawyer has said his client was handed a flash drive that had classified information on it that he didn’t know about.

David Whelan described the case as political and voiced hope that the U.S. government will help gain his freedom.

“The Russian Federation wouldn’t talk about releasing Paul until he was convicted,” he told The Associated Press. “And so, now that that has happened, we hope that the U.S. government will speak to the Russian government. We will have to continue to treat it as a political case, which is what it is, and seek a political solution for his freedom.”

Kremlin spokesman Dmitry Peskov rejected allegations that Whelan was a political hostage, telling reporters his guilt was proven at the trial. Peskov refused to comment on whether Russia could be eyeing his exchange for some of its citizens in the U.S. custody.

“There have been proposals of exchange, the issue is being discussed,” he said.

Bout, a Russian arms trader, is serving a 25-year sentence in the U.S. for a 2011 conviction on charges he conspired to sell millions of dollars of weapons to Colombian rebels. He insisted he was a legitimate businessman.

Yaroshenko, a Russian pilot, is serving a 20-year sentence for conspiracy to smuggle cocaine into the U.S. after he was arrested in Liberia in 2010 and extradited to the U.S.

Russian officials have cast the convictions of Bout and Yaroshenko as politically motivated and pushed for their release.