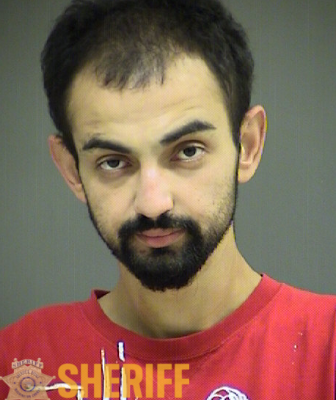 Early Wednesday evening a Washington County Sheriff’s Deputy was on patrol in Aloha when she spotted a man allegedly speeding in a white Ford F-150 in the area of SW Blanton Street and SW 170th Avenue.

The deputy says when she attempted to stop the truck, the driver allegedly sped away and ran a red light.

Deputies say they did not pursue the car for safety reasons.

During an investigation it was determined that the truck had been allegedly stolen earlier in the week during a burglary of auto repair shop.

A deputy recognized the driver of the stolen truck to allegedly be 26 year Ahmed Sadiq, of Aloha.

On Thursday a deputy was on patrol in the same area when she saw the same white Ford F-150 in an apartment complex parking lot.

Sadiq was in inside.

Deputies were able to arrest Sadiq as well as his passenger, 28 year old Ethan Alexander of Aloha.

Inside the truck deputies found keys to another allegedly car stolen during the auto shop burglary.

They found that stolen car in the same parking lot.

Sadiq was booked into the Washington County Jail on the following charges: