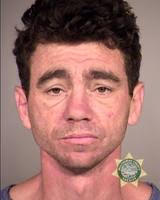 Update: The assault suspect, Timothy J. Maxwell, 37 was released from the hospital Saturday morning after being treated for a stab wound. He was booked into the Multnomah County Detention Center on a charge of Assault in the Third Degree. The other suspect is described as a white male adult. His identity is still unknown.

Police responded to a report of a stabbing on Southwest 1st avenue.

When they arrived they found a man with a non life threatening stab wound to the chest.

Officers say after investigating they determined the stabbing was an act of self defense.

They say the victim was walking past Lovejoy Fountain when two suspects allegedly began following him.

The suspects allegedly caught up to the man and one held him down while the other began punching and kicking him.

The alleged victim then pulled out a knife knife and stabbed one of the suspects.

The other suspect ran off and has not yet been found.

The victim was treated at the scene.