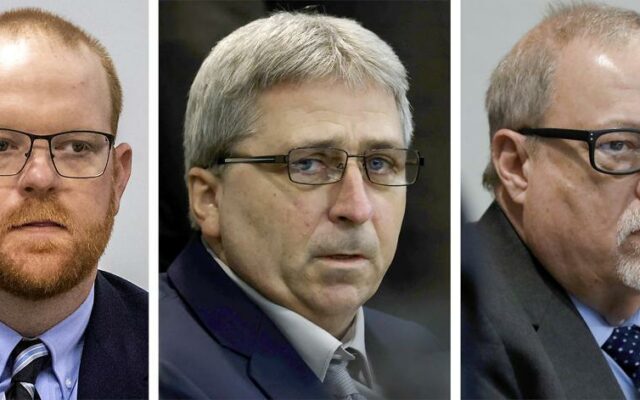 This photo combo shows, from left, Travis McMichael, William "Roddie" Bryan, and Gregory McMichael during their trial at at the Glynn County Courthouse in Brunswick, Ga. The jury is deliberating in the federal hate crimes trial of three white men in the killing of Ahmaud Arbery. Jurors discussed the case for three hours Monday, Feb. 21, 2022, and were to resume Tuesday morning. The three men are serving life sentences for the murder of the 25-year-old Black man. (Pool, File)

BRUNSWICK, Ga. (AP) — The three men convicted of murder in Ahmaud Arbery’s fatal shooting were found guilty of federal hate crimes Tuesday for violating Arbery’s civil rights and targeting him because he was Black.

The jury reached its decision after several hours of deliberation on the charges against father and son Greg and Travis McMichael and neighbor William “Roddie” Bryan.

During the trial, prosecutors showed roughly two dozen text messages and social media posts in which Travis McMichael and Bryan used racist slurs and made derogatory comments about Black people. The FBI wasn’t able to access Greg McMichael’s phone because it was encrypted.

The McMichaels grabbed guns and jumped in a pickup truck to pursue Arbery after seeing him running in their neighborhood outside the Georgia port city of Brunswick in February 2020. Bryan joined the pursuit in his own pickup and recorded cellphone video of Travis McMichael fatally shooting Arbery. The killing became part of a larger national reckoning on racial injustice after the graphic video leaked online two months later.

Defense attorneys contended the three didn’t chase and kill Arbery because of his race but acted on the earnest, though erroneous, suspicion that Arbery had committed crimes in their neighborhood.