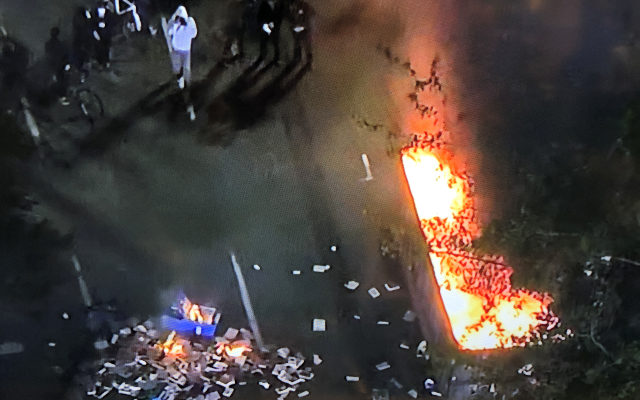 PORTLAND, Ore. — Two peaceful rallies on Wednesday night over the death of George Floyd by Minneapolis Police turned south in Portland with property damaged, fires set and officers assaulted. One person was arrested and two cars were towed.

The rallies started around 6:00pm at Pioneer Courthouse Square in downtown Portland and Revolution Hall in Southeast.  Thousands marched from the eastside over the Morrison Bridge to Waterfront Park where they peacefully assembled for several hours.  The group at Pioneer Square later joined them.

The crowd moved to Southwest 3rd and Jefferson just after 9:00pm.  Police say several times during the demonstration, agitators threw projectiles at the fence protecting the Justice Center and the officers guarding it.  Members of the peaceful crowd united their voices to stop the violence.  The gathering continued to be peaceful for several more hours.

“The Portland Police Bureau continues to have dialog with the demonstration organizers to facilitate safety for all and to allow for the exercise of First Amendment Rights,” said Police Chief Jami Resch.  “Tonight was a great example of a safe and responsible demonstration.  This speaks to the testament of the thousands of participants and sends a powerful message.  I greatly appreciate the community for expressing themselves while respecting others.”

After the majority of the crowd left around 2:00am, agitators remained.  They set a large dumpster, newspaper boxes and what appeared to be a large pile of books on fire on Southwest 2nd Avenue between Main and Salmon.

Officers intervened when a security guard was hit in the head and windows on a building were broken out.  Police created a safety barrier for the guard to get medical attention.  As they were disbanding, an officer was hit in the jaw with a full can of beer and received medical treatment.

The civil disturbance continued well past 4:00am as the crowd continued to vandalize buildings and light fires.  Officers advised those in the area that they needed to leave immediately or crowd control munitions would be used against them.

Arrests were made and two vehicles were towed before the crowd finally dispersed.  A vehicle involved in an incident the night before was pulled over and the driver arrested.  Police say it nearly struck one of their Rapid Response Teams.

Chief Resch added: “We have witnessed a pattern of behavior in the past several days where select agitators remain and target the police, engage in crimes, and cause disorder.  We will continue our efforts to identify, arrest, and hold responsible those who engage in crimes in our City.”

Police have not yet said how many people were arrested.

We support peaceful demonstrations and want our city to unify and be an inclusive environment where people trust their law enforcement. We have done a lot of work, but we have more to do. We are listening and need your ideas and for you to be a part of public safety here. pic.twitter.com/OU7saCs55I

Portland Mayor Ted Wheeler and city officials will hold a press conference this afternoon at 1:00pm.  Mayor Wheeler is expected to be joined by Police Chief Jami Resch.  You can watch their comments live at 1:00pm here on KXL.com.