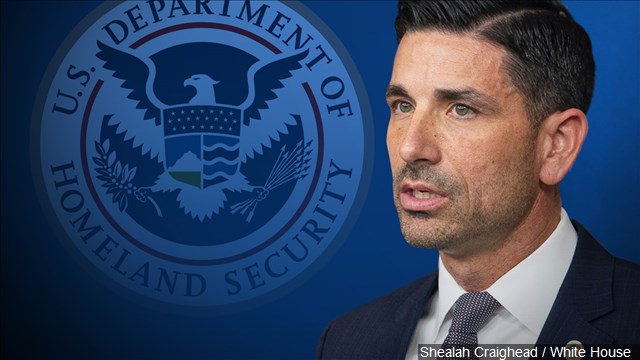 WASHINGTON (AP) — President Donald Trump’s acting head of the Department of Homeland Security abruptly resigned Monday, leaving the post ahead of schedule as the nation faces a heightened terrorism threat from extremists seeking to reverse the election.

The announcement by acting DHS Secretary Chad Wolf was perplexing. It came less than a week after Wolf pledged to remain in office and just 10 days before the inauguration of President-elect Joe Biden. Wolf cited a legal challenge to his leadership as a reason for his resignation, but that had surfaced months ago.

“For months we have known Chad Wolf has been serving illegally in his position, so the timing of his resignation from the Department today is questionable,” said Rep. Bennie Thompson, the chairman of the House Homeland Security Committee. “He has chosen to resign during a time of national crisis and when domestic terrorists may be planning additional attacks on our government.”

Wolf, who had been serving in an acting capacity since November 2019 and was never confirmed by the Senate, said he was compelled to leave by “recent events,” including court rulings that found he could not legally hold the position. He did not specify the other events or cite other factors.

“These events and concerns increasingly serve to divert attention and resources away from the important work of the Department in this critical time of a transition of power,” he said in a written message to DHS employees.

The resignation comes a day before Trump is set to visit the U.S.-Mexico border wall, Trump’s signature political project and one overseen by DHS.

Wolf’s departure followed the abrupt resignation of other Cabinet officials angered by Trump’s role in encouraging the mob to storm the Capitol on Jan. 6 over his false claims of election fraud.

Wolf condemned the violent attack on the Capitol by Trump supporters, calling it “tragic and sickening.” He also said then he would stay on at DHS until the end of the administration to ensure a smooth transition and to help the department stay focused on the threats facing the nation.

It was unclear what prompted him to change course with the nation braced for the potential for more violence ahead of the Jan. 20 inauguration. The FBI has warned of plans for armed protests at all 50 state capitals and in Washington, D.C

Wolf led DHS as it carried out Trump administration priorities on immigration and law enforcement, prompting criticism that he politicized a department that was created to better protect the nation in the wake of the Sept. 11, 2001, terrorist attacks.

The department was accused during his tenure by a whistleblower of suppressing facts in intelligence reports that Trump might find objectionable, including information about Russian interference in the election and the rising threat posed by white supremacists. Wolf and the department denied the allegations.

The acting secretary defended his tenure in his statement to employees, saying DHS had strengthened border security and successfully launched the cybersecurity agency that helped safeguard the 2020 election.

“I leave knowing that the Department has positioned itself for an orderly and smooth transition to President-elect Biden’s DHS team,” he wrote. “Welcome them, educate them, and learn from them. They are your leaders for the next four years — a time which undoubtedly will be full of challenges and opportunities to show the American public the value of DHS and why it is worth the investment.”

Peter Gaynor, the administrator of the Federal Emergency Management Agency, will serve as acting head of the Department of Homeland Security until the Biden administration takes over.

Biden has nominated Alejandro Mayorkas, a former senior DHS official, to lead an agency that carried out Trump administration priorities on immigration and law enforcement and was criticized for becoming politicized as a result.

Wolf had been a chief of staff to Nielsen and an undersecretary in the agency as well as an official at the Transportation Security Administration, a component of DHS. He has also worked as a lobbyist.

Trump had said he liked the “flexibility” of having senior officials in an acting status despite criticism that it keeps people from long-term planning that would give an agency more stability.

The president sent Wolf’s nomination to the Senate for confirmation after the Government Accountability Office determined that neither Wolf nor his deputy, Ken Cuccinelli, were legally eligible to run DHS because of a violation of the rules of succession in federal agencies.

That finding has put policy changes under their tenure, especially related to immigration, in potential jeopardy because of legal challenges, including one as recently as Friday in which a federal judge blocked sweeping asylum restrictions imposed by the administration.

Chad Wolf said he would resign Monday even though he had hoped to stay in the post through the end of the administration on Jan. 20. Wolf said his departure was prompted by court rulings that he was not entitled to hold the position under federal succession rules among other reasons that he did not specify. Federal Emergency Management Agency Administrator Pete Gaynor will serve as interim head of DHS. Wolf had been acting DHS secretary since November.