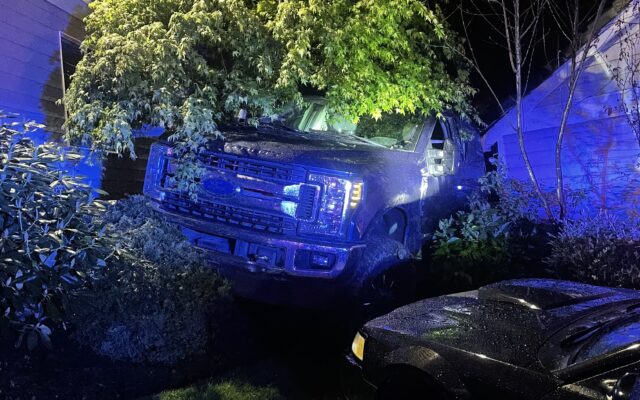 The stolen truck stuck in place

Tigard – An overnight call early Sunday morning in a Tigard neighborhood leads Police to the arrest of two men with a long-list of charges.
Just after midnight, witnesses report two men tampering with cars in the 14800 block of SW 74th Avenue. A patrol officer who was nearby at the time saw the suspect’s Ford F-250 turn into a nearby apartment complex in the 7700 block of SW Bonita Road. The officer ran the license plate, learning the truck was stolen and attempted a traffic stop.

The suspect rammed the F-250 into the officer’s patrol car, then drove onto a grassy area where the truck got stuck between two buildings at the apartment complex. The driver and passenger both took off on foot, sparking two K-9 tracks as officers from several other agencies arrived to assist.

The driver hopped fences and tried getting into a residence at one point before he was found up in a tree by K-9 Rico. The passenger was found hiding in blackberry bushes nearby, thanks to a Tigard Police drone operator who found the heat signal.

The driver was later identified as Zachary Thomas, age 27. His passenger was identified as Dylan Hardy, age 22. They were both taken to the Washington County Jail on several criminal charges (please contact the jail for specifics). They are also under investigation for crimes committed in Vancouver, Washington.

The Tigard officer who was rammed by Mr. Thomas has minor injuries and did not require medical treatment. We are very grateful for the neighbors who called in the original suspicious activity, and to our police partners from Tualatin, King City and Lake Oswego as well as the Wash. Co. Sheriff’s Office for their quick assistance on this call.