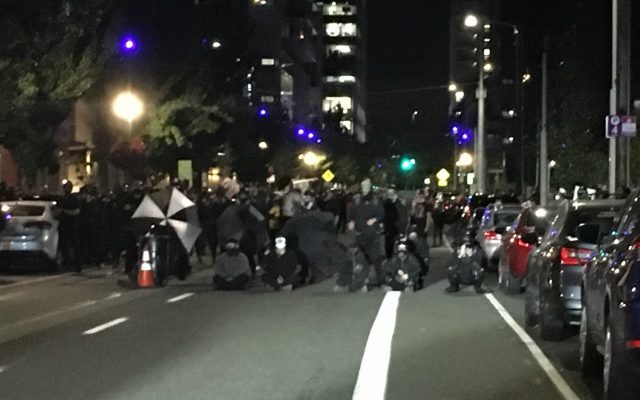 PORTLAND, Ore. — Police made 11 arrests and declared an unlawful assembly on Wednesday night, the 90th night of demonstrations in Portland.

A couple hundred people marched in South Portland from Elizabeth Caruthers Park to the Immigration and Customs Enforcement office just after 10:00pm where they blocked traffic and vandalized the building.  A security camera was shot out by a paintball gun and a fire was set.

The crowd sprayed federal officers trying to clear the scene with pepper spray, threw items such as large rocks, bottles and eggs and shined lasers at them.  Several officers were hit by rocks and it drew blood on one officer.

Most of the group dispersed by midnight without the use of tear gas or crowd control munitions.

Meanwhile, there were dueling protests by Gresham City Hall.  Black Lives Matter protesters went there after learning that a man accused of pulling a gun on counter-protesters last Saturday in Portland would be there.  Police separated the two sides and the situation stayed relatively calm.