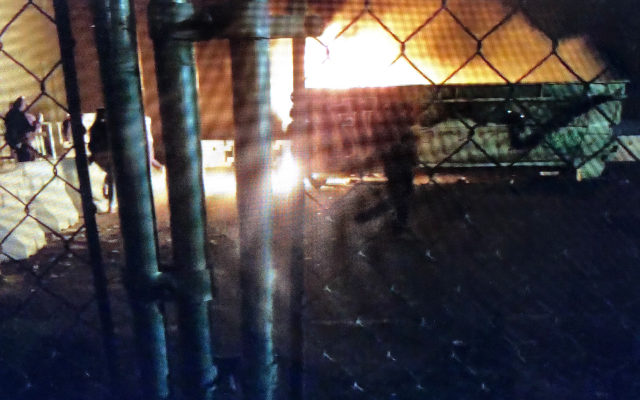 PORTLAND, Ore. — A 7th night of protests over the death of George Floyd by Minneapolis Police wound its way through downtown and Southeast Portland on Thursday night.  After hours of peace, some of the crowd again turned violent.  17 adults were arrested and three vehicles were towed.

Much like previous nights, two organized groups of demonstrators began to gather around 6:00pm for rallies at Pioneer Courthouse Square and Revolution Hall.  Thousands marched over the Morrison Bridge to Waterfront Park and rallied for several hours.  Portland Trail Blazers star Damian Lillard joined the crowd.

After the rally at Waterfront Park, the majority of the group then marched back to the eastside.  Around 9:00pm, several demonstrators moved to Southwest 3rd and Main.  The crowd occasionally shook the fence and some tried to climb it.  Police say water bottles, full beer cans, eggs, apples, and other projectiles were thrown at them.  There was a report that someone fell out of a tree and a fight near the elk statue sent one person to the hospital.

Police say a group of agitators moved to Southwest 3rd and Salmon around 1:30am, setting multiple fires including to the contents of a dumpster.  Construction barriers were then tossed into the fire.  The crowd was blocking the street with their vehicles, engaging in speed racing near onlookers, drinking alcohol and lighting fireworks.  They again started throwing glass bottles, fireworks and other projectiles at officers.  One officer was hit with a firework, but was not injured.

After declaring a civil disturbance and an unlawful assembly, the group was told to leave the area and was warned that if they did not that they would be subject to arrest or use of force.  As officers were dispersing the group, several vehicles drove through the area the wrong-way on a one-way street, nearly hitting pedestrians.  Officers intervened and stopped three vehicles.  The drivers were arrested and their vehicles were towed.  One of the vehicles was stopped using spike strips.

Some in the crowd didn’t want to leave and targeted the police bureau’s sound truck.  Lasers were pointed at the driver while he was trying to drive and rocks and glass bottles were also thrown.  The operators of the sound truck used a Long Range Acoustic Device to defend themselves.  LRAD uses sound frequencies to deter crowds.  The remaining crowd then began to disperse after 3:30am.

“For another night, thousands of peaceful demonstrators were able to demonstrate, march, and express their first amendments rights in a safe manner.  We thank them once again for managing a successful event,” said Police Chief Jami Resch.

She added: “Several hundred others remained downtown after the primary group left.  This group engaged in criminal activities despite repeated warnings to stop.  Officers did a fantastic job of safely and effectively stopping several involved vehicles and occupants and effecting arrests.  We will continue to facilitate free speech and assembly and focus efforts on arresting those who engage in criminal activity that reduces our public safety.”

Portland Mayor Ted Wheeler and city officials will hold a press conference this afternoon at 12:00pm.  Mayor Wheeler is expected to be joined by Police Chief Jami Resch.  You can watch their comments live here on KXL.com.