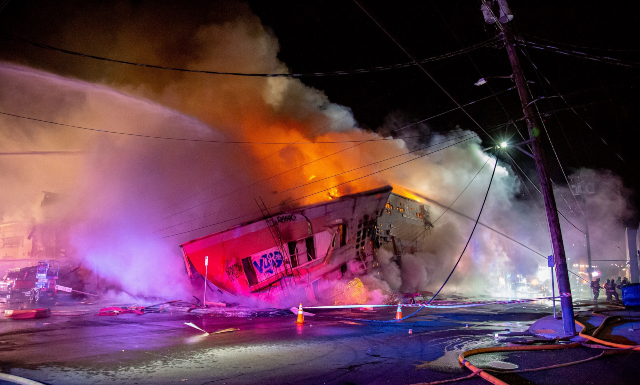 PORTLAND, Ore. — Fire ripped through and destroyed an abandoned wooden warehouse in Southeast Portland just after midnight on Friday morning.

Part of the building at Southeast 9th and Alder collapsed, swallowing a stop sign and part of the sidewalk.

The building dates back to 1906.  Portland Fire and Rescue has been familiar with the vacant building for many years.  There have been other fires there within the past few years, most recently in July.

“This is one of the most hazardous buildings firefighters can face.  It is so perilous that we indicate these buildings with a “U” marker indicating that it is an unsafe building,” said Portland Fire Chief Sara Boone.

Crews searched the basement for potential victims in zero visibility.

There’s no word yet on what started the fire.  Firefighters expect the flames to continue burning throughout the day.

Chief Boone added: “Fire conditions quickly changed as they were conducting search operations and they had to withdraw from the building.  Every person on scene did incredible job and I am so grateful that no one was hurt and thankful for the effort everyone displayed on this scene.”