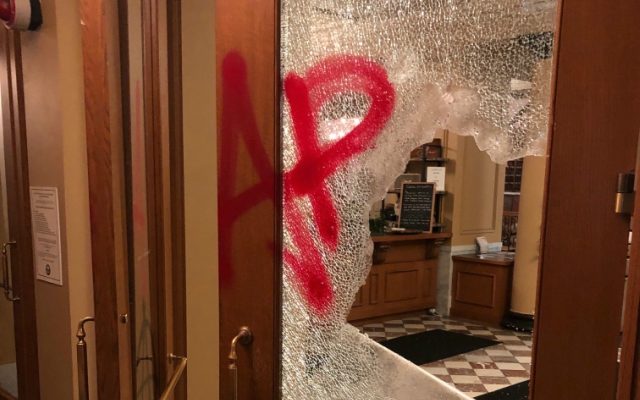 PORTLAND, Ore. — For the 22nd time this summer, police declared a riot during a demonstration in Portland.  Protesters gathered on Tuesday evening for an 89th straight night.  23 people were arrested outside City Hall.

About 150 people converged at Southwest 4th and Madison in downtown Portland after marching from Shemanski Park around 9:30pm.  They reportedly found an unlocked door and let themselves inside where they broke windows, sprayed graffiti, vandalized the building and set a fire outside.  Some were seen smashing a surveillance camera.

Police arrived and started dispersing the crowd through the downtown streets.  Officers retreated, but returned when they crowd regrouped and a riot was declared just after 11:00pm.

Within a few minutes, a man was seen trying to light the building on fire by igniting an aerosol can.  Officers were hit with items thrown by the crowd such as eggs and bottles.  Lasers were shined in their eyes.  The glass at a bus shelter was shattered.

Officers used crowd control munitions to clear out the group, most of which left by 1:30am.