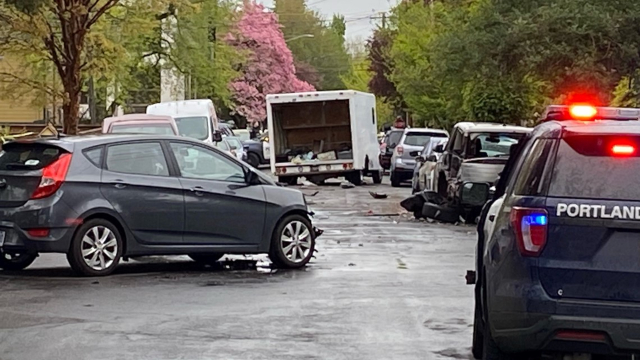 PORTLAND, Ore. — Two people died and several others were injured in crashes over the weekend, bringing the total to 21 people who have died in traffic collisions on Portland streets this year.  The Major Crash Team responded to three serious crashes in less than 24 hours.

Police were in pursuit of a stolen box truck from Southeast 20th and Division when the driver crashed into another vehicle and hit two pedestrians near Southeast 26th and Ash late Friday afternoon.  One man on foot has life-threatening injuries.  Multiple suspects ran off from the scene.

A man was seriously injured when he was hit by a car late Friday night at Southeast 82nd and Henderson Street.  The driver who hit him took off.

A driver died and a passenger was injured when their vehicle crashed into a power pole on Highway 30 near the St. Johns Bridge early Saturday morning.  The man who lost his life is identified as 44-year-old Joseph Dubois.  Investigators say he was speeding when he lost control.  First responders encountered live wires on the road.

One person died when two vehicles collided at North Columbia Boulevard and Peninsular Avenue on Saturday afternoon.  Investigators say 21-year-old Andrew Bachman was speeding and driving recklessly when he hit a vehicle with a family inside head-on in the opposing lane.  A passenger who ran off was located and taken to the hospital.   The family of five, including three children, were wearing their seatbelts and released from the hospital later in the day.

All three police precincts were placed on high priority over the weekend with only life safety calls being responded to as police were kept incredibly busy with crashes and shootings, significantly straining resources citywide.