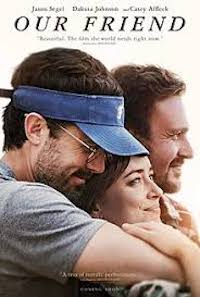 In Brief: The film Our Friend is about love. Cancer is the villain. The heroes are Nicole, Matt and Dane. Matt and Nicole are married. Dane is their best friend. She has cancer. It’s killing her. Dane moves in with them to help them and their children with household duties, her care and his. It’s a beautiful movie based on a true story.

Click here and is my interview with the film’s director, Gabriela Cowperthwaite.

Also, check out my review of what is the best film I’ve seen so far this year. Click here to read the review.