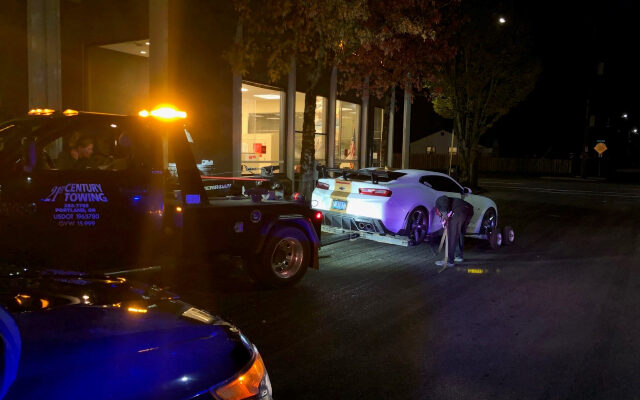 PORTLAND, Ore. — Hundreds of spectators gathered at locations all across the city for illegal street racing on Sunday night.  People were seen riding on the hoods of cars as they did donuts before the crowd.  Police arrested 14 drivers and cited 8 others for traffic violations.  16 cars were towed and two vehicles were disabled using spike strips to flatten their tires.  Three juveniles were detained in a stolen car and released to their parents.

Street racers took over multiple streets and bridges including the top deck of the Fremont Bridge, Interstate Bridge, Vista Ridge Tunnel on Highway 26 and multiple residential neighborhoods in North and Northeast Portland.  More than 400 vehicles gathered at Northeast 122nd and Airport Way around 8:00pm.

There was at least one crash involving speed racers at North Columbia Boulevard and Argyle Street where a vehicle hit a pole.  Two other wrecks are believed to be related.  Those happened on I-5 southbound at Marine Drive,  and Northeast 122nd and Halsey Street where the driver hit two vehicles and took off.

Police say that participants and spectators have become more aggressive lately in their stunts and response to police, throwing items at officers.  Events are being promoted on social media inviting participants from other states.

Of the list of arrests, more than half were not from the Portland area.