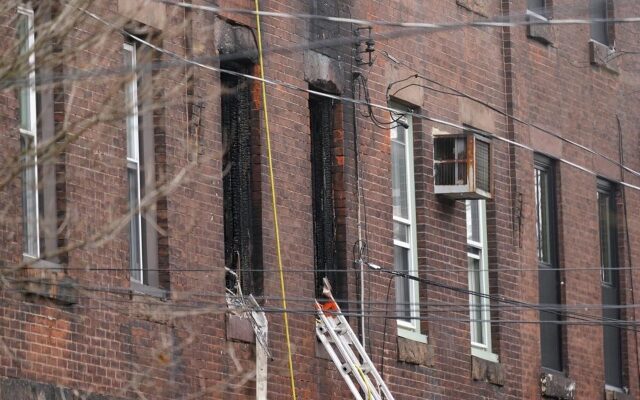 Fire damaged windows are seen at the scene of a deadly row house fire, Wednesday, Jan. 5, 2022, in the Fairmount neighborhood of Philadelphia. (AP Photo/Matt Rourke)

Officials said at a news conference later in the morning that there were four smoke detectors in the building but that none were operating.

Firefighters and police responded to the fire at a three-story rowhouse in the city’s Fairmount neighborhood around 6:40 a.m. and found flames coming from the second-floor windows, fire officials said. The house had been converted into two apartments, police said.

The fire was brought under control after less than an hour. WPVI-TV reported that at least one child was seen taken out on a stretcher.

Television news footage showed ladders propped up against the smoke-blackened front of the house, with all its windows missing. Holes remained in the roof where firefighters had broken through.

“I knew some of those kids — I used to see them playing on the corner,” said Dannie McGuire, 34, fighting back tears as she and Martin Burgert, 35, stood in the doorway of a home around the corner. They had lived there for a decade, she said, “and some of those kids have lived here as long as us.”

“I can’t picture how more people couldn’t get out — jumping out a window,” she said.

“Losing so many kids is just devastating,” said Mayor Jim Kenney. “Keep these babies in your prayers.”